When an Architect designs a building, the ultimate challenge is to organize the space in an integrated way that unifies the entire building. Among the most difficult design problems that come up is the placement and integration of circulation (stairs, ramps, etc.). In my last project I attempted to utilize the circulation as the major means of experiencing the space. It was the force that drove the design, around which all other elements of the building fell into place. I did this by making the stairs quite large and open to the spaces below them. While this approach was innovative and effective in many aspects, I learned a very valuable lesson about how to use a purposeful circulation system in the design process.

My final review for the project raised a very interesting question. My reviewing Professor highlighted an architectural phenomenon referred to as the Architectural Promenade. She pointed out that because the circulation system is so large, it can not simply be a means of bringing people from point A to point B. It must in some way relate to a larger spacial sequence that takes people through other architectural moments to get to point B. I did some research to try and find an example of this design approach in use and found LeCorbusier’s Villa Savoye.

The building features a main ramp circulation system which at each level has moments at which the person can experience an Architectural element. The end of the “promenade” through the house ends with a viewpoint out of the roof terrace. 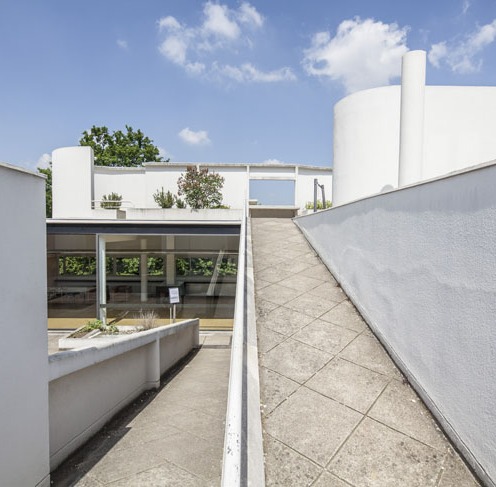 This very deliberate location and placement of the circulation is an example of the Architectural Promenade. It responds to the challenge of seamlessly integrating the spatial sequence through circulation with the spacial distribution of the building.